This delicious Lemon Bundt cake is both moist and tangy. The addition of buttermilk creates a texture similar to that of homemade pound cake. While the lemon zest gives a beautiful background note, the prize is in the sweet and tart glaze added to the top and sides while warm. The glaze soaks slightly into the cake trapping the flavors.

The history of the lemon cake is a winding one that seems to change with each teller. It is speculated that the earliest version was created in the 1700s and based on traditional pound cake.

The first icing was a boiled combination of sugar, eggs, and flavoring (citrus) when available. This was poured over the finished cake, which was then returned to the oven. When completed and cooled the cake would have a hard glaze or crackle type finish.

Similarly, we find a cake named after Robert E. Lee in the late 1800s. This was a citrus layered cake. Lemons and oranges were combined with sugar and cooked to create a type of jelly which was then applied between layers of cake, stacked, then the balance of the jelly icing spread on all sides. The recipe for this specific cake varies greatly but the basic idea of delicious soaked cake remains.

On to WW1 in the USA. Food rationing was a reality in the USA during WWl. While many food items were difficult to find, and some were a treat at best. One of the principal items was wheat. Wheat was needed to supply the troops and allies with bread and the like so they could continue their fight.

There was a time American’s were called upon to reserve wheat. The US government issued recipes utilizing rice flour. A rice flour sponge cake with a lemon glaze brought a bit of happiness to an otherwise uncertain time.

Bundt pans were introduced in the 1950s by Nordic Ware. They offered an option similar to the classic german pan. however, being made of aluminum they were lighter and less likely to break like their glass counterparts. The center cone ensures that dense batters can cook thoroughly and remain moist.

Throughout history, the Lemon Cake has grown to become a sweet part of our tapestry which can be found popular in most cultures. A sought-after treat for centuries. Definitely memorable.

This cake is beautiful some fresh berries, perhaps some raspberries, or blueberries. Heavy whipped cream, clotted cream, or even ice cream is a nice touch.

Seize the moment and create one up for a special occasion. Lemoncello or candied lemons are nice touches to this classic delight.

For more information on the history of cakes check out The Food Timeline. 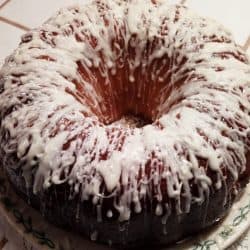 For additional ideas on how to best enjoy your jams and marmalades, consider our book “Beyond the Bread – Tasteful Exploration with Jam & Marmalade” available in both Print and Kindle Editions.