When pairing jam and cheese look at the whole picture. Consider all the possibilities before deciding on a limited few. You may be serving your jam and cheese pairing with wine, additional fruits, maybe Black Walnuts or Smoked Almonds, Artisan bread, and fresh basil or ginger. Sometimes less is more.

Keep in mind that your goal is to offer tastes that complement one another, not overpower one another. It should be a thoughtful, sophisticated adventure for your palate not a college frat party for your mouth.

When purchasing a gourmet jam or marmalade give thought to an appropriate pairing cheese. To be clear, pairing jam and cheeses of similar cost and quality will result in a more palatable experience.

Serve your cheese with its accompaniment rather than mixed together. Jam should not be poured over the top of your cheese. You and your guests should be able to enjoy the cheese itself, as well as the jam. Then enjoy them together in a combination that suits their personal tastes. Offering additional accompaniment is welcome, such as preserved meats or smoked fish. Choose with thought.

Choosing a few key items that support the nuances of your cheese and jam will ensure a memorable experience.

Acquiring the highest quality cheese is an important part of the process. Once you have chosen the cheese which to build your paring on it is imperative to engage it with a discerning jam such as LunaGrown.

A sophisticated cheese paired with LunaGrown Jam is certain to bring you great pleasure. Enjoy our suggested cheese and jam pairing suggestions below.

Bold cheeses pair well with strong flavored jams. The opposite is also true: mild cheese unite well with subtly flavored jams. Avoid domination of one flavor over another. Your goal is to achive the magic that happens when good flavors compliment each other.

If you are serving your jam and cheese pairing with accompanying wine or artisan beer, and are not a connoisseur ask questions of the purveyor. A bit of guidance from the maker is always helpful when creating the pairing experience you had in mind as well as the atmosphere you are creating.

When serving jam and cheese it is best to chill your jam as well as the serving dish(es) or cup(s) the jam will be going into, this will help to keep the jam firm for a longer period of time while it sits out, as well keeping it fresh in appearance and flavor.

It is also wise to avoid double-dipping, or spooning jam onto your cheese and allowing the same spoon to go back into your jam jar. Cheese is a living culture that can be introduced to your jam in this matter, thus often shortening the shelf life of your jam product. For optimal enjoyment always serve your jam product from a separate serving dish. You can always add more.

A PDF printable version of the above pairing chart is available here: Jam & Cheese Pairing Guide

If you are not a wine connoisseur ask questions and find out what wines would best suit the pairing you had in mind as well as the atmosphere you are creating. Or see our suggestions here: LunaGrown suggested Wine and Jam Pairings

When serving Jam and Cheese as a pairing it is best to chill your jam as well as the serving dish or cup the jam will go into, this will keep the jam firm for a longer period of time while it sets out as well as keeping it fresh in appearance and flavor.

Discover more about Jam, Cheese and Wine Pairings for your next Social Gathering by reading our helpful guide. 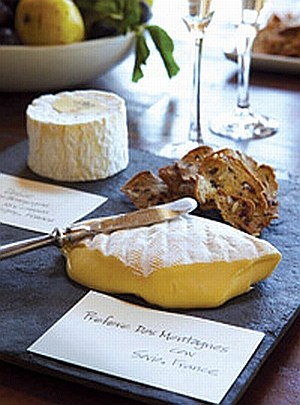 What’s the difference between sheep’s, goat’s, and cow’s cheese?

“The difference between the three kinds of milk is their composition or structure. The milk has different protein structures, different fatty acids, and different butterfat contents. This is part of the reason that each milk, when it becomes cheese, tastes different from the others. There are other factors too, including how each animal metabolizes what they eat. That translates directly to the milk. For example, goats don’t metabolize carotene the way that cows do. As a result, goat’s milk remains snow white in color, while cow’s milk has a yellowish or sometimes orangeish hue.”

Which types of milk are used for aged cheeses?

“A beneficial mold called Penicillium Roqueforti. A cousin to the penicillin that fights infection in people, it gives a wonderful flavor to the cheese, and protects against any undesirable molds and bacteria.”

“Milk is made up of many nutrients, among them a protein called casein. During cheese making, milk is fermented by a collection of beneficial bacteria we call a starter culture. Enzymes released by the starter culture change casein, milk protein, in a process called proteolysis. This controls whether a cheese is soft or firm. How well and how long you heat the curds, how you manipulate the curd, and the kind of rind you cultivate also have some influence, but for the most part you need to choose the right starter culture for the right kind of cheese.”

“If cheese is made with raw milk and aged over 60 days, as required by Federal Law, it is as safe as a cheese made with pasteurized milk. Of course, you only want to eat cheeses made by professional cheesemakers that are regularly inspected, whether raw or pasteurized. The reason raw milk, which in rare cases can carry organisms that make you ill, is safe in cheese aged over 60 days is because cheese is cultured. Beneficial bacteria are added to the cheese which wipes out all competition and protects their turf, much like gangs. After 60 days, any unwanted bacteria have been vanquished.”
-Dan Strongin, Edible Solution (www.ediblesolution.com)

We use cookies on our website to give you the most relevant experience by remembering your preferences and repeat visits. By clicking “Accept All”, you consent to the use of ALL the cookies. However, you may visit "Cookie Settings" to provide a controlled consent.
Cookie SettingsAccept All
Manage consent

This website uses cookies to improve your experience while you navigate through the website. Out of these, the cookies that are categorized as necessary are stored on your browser as they are essential for the working of basic functionalities of the website. We also use third-party cookies that help us analyze and understand how you use this website. These cookies will be stored in your browser only with your consent. You also have the option to opt-out of these cookies. But opting out of some of these cookies may affect your browsing experience.
Necessary Always Enabled
Necessary cookies are absolutely essential for the website to function properly. These cookies ensure basic functionalities and security features of the website, anonymously.
Functional
Functional cookies help to perform certain functionalities like sharing the content of the website on social media platforms, collect feedbacks, and other third-party features.
Performance
Performance cookies are used to understand and analyze the key performance indexes of the website which helps in delivering a better user experience for the visitors.
Analytics
Analytical cookies are used to understand how visitors interact with the website. These cookies help provide information on metrics the number of visitors, bounce rate, traffic source, etc.
Advertisement
Advertisement cookies are used to provide visitors with relevant ads and marketing campaigns. These cookies track visitors across websites and collect information to provide customized ads.
Others
Other uncategorized cookies are those that are being analyzed and have not been classified into a category as yet.
SAVE & ACCEPT
Powered by